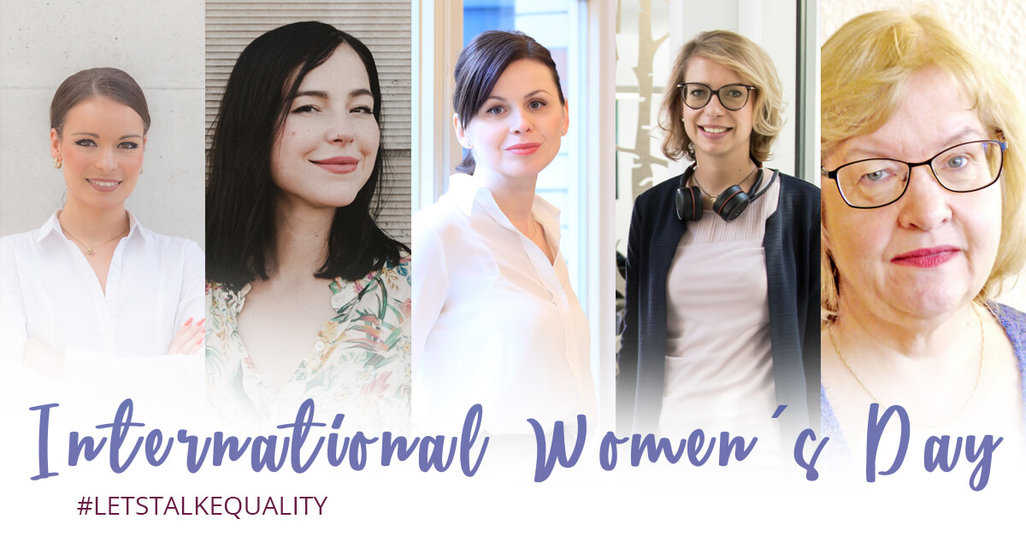 #ChooseToChallenge is the motto of this year´s International Women´s Day. Even 100 years after the first IWD, equal opportunities are unfortunately still not something that can be taken for granted.

There are many topics worth discussing on International Women’s Day. #ChooseToChallenge is the campaign theme of this year’s IWD. And 100 years after the first official celebration of this day, we are still facing the challenge that equal opportunities cannot be taken for granted and women are still fighting for equal rights, also in Germany.

We sat down with our colleagues Sandy Pötzsch, Consultant in the Team Customer Relationship, Astrid Kleinau-Kleffe, Tech Project Manager, Sarah Geiger, Manager of the Sales, Strategy and Operations Team, Silvia Heredia Minthorne de Kläner, Head of People, Organization and Legal and Elena Aubell, LucaNet’s COO to talk about what equal opportunities mean to them and what needs to change so that we can really talk about equality for all. And whether the introduction of a mandatory quota for women in senior management of listed companies is the right approach. Something that worked at LucaNet without a legal regulation, by the way: Elena Aubell has been the woman „on board“ since January 01, 2021.

March 8 has officially been International Women’s Day since 1921. It stands for equal rights and awareness against bias. What does this day mean to you?

Sarah: I think it’s good that this day raises awareness and attention to the gap that still exists between women and men. Also, in terms of employment opportunities. That may not be such a serious problem in Germany – we’ve had a female chancellor for the past 16 years and men and women officially have the same rights and equal access to education. But even here, there are still differences if we take a closer look. Statistics show that only twelve percent of all board members in German DAX, MDAX, and SDAX companies are female. And even one level below that, only just under 30 percent of executives are women. Unfortunately, Germany is below average in this respect compared with other European countries. And the gender pay gap is still very large in Germany. So yes, the International Women’s Day is very important. At the same time, I think that of course it’s not just enough to solely address gender inequality and discrimination against women. There are still many types of discrimination that we need to address.

Elena: I can say that I myself haven’t experienced discrimination against my gender, heritage or education. I must mention that my family emigrated from Russia when I was a child and I don’t have the German Abitur. But of course, this goes beyond one single woman, the day has an important global significance, because so many girls and women are still pressed into certain stereotypes, are being abused, and disadvantaged. That’s why I’m happy to support it, even though I personally find it very sad that in 2021 we still have to talk about the fact that a large part of the world’s population, namely women, need to be treated equally or treated well. Let’s keep challenging prejudice and injustice. Let’s talk equality!

Coding used to be a typical female profession

Current figures show that only 20 percent of IT students in Germany are female. Astrid, you’ve been working in the Tech industry for a long time and have had quite a few experiences when it comes to how women are treated in this professional field. How much has changed in recent years?

Astrid: A lot has changed – even though we are still a long way from where we want to be. There is still a lot of room for improvement in the numbers: I read that in 2020 the proportion of women in the Tech industry in Germany was at 16 percent. But I think a lot has also already happened in society’s awareness. I have a good example from the 1990s: Back then, I worked as a technical manager in an IT training center for women. In that role, I sought an offer from a networking company. But the offer I got was far from the specifications I had given. So, I picked up the phone and followed up. I could literally hear the man on the other end of the line thinking: „Oh, it’s a woman, she doesn’t have a clue anyway, I can tell her anything!” But at the end of the conversation, he offered me a job (laughs)!

I think what’s also lacking for young girls are female role models they can look to for guidance. More women like Aya Jaff. That’s why I’m happy to work at a company like LucaNet with 22 percent of women in our tech department. That’s higher than the national average.

Silvia: And we would also like to hire even more women, but unfortunately, very few apply for our positions in Tech. But more on that later. I have to agree though, I too am definitely noticing a positive change in terms of awareness of the issue.

For me, equal opportunities are also very closely linked to my personal situation as a mother of three. There have always been moments in my professional life when people thought from the beginning that I was less capable or that I would deliver less. Because it was assumed that my focus was elsewhere. And having to refute this all the time, it’s simply exhausting. I very much wish that my daughters will no longer have to experience this in the future.

It should be about the qualification, not the quota

Voluntary efforts haven’t helped enough. Listed companies are now required by law to have at least one woman on an executive board with more than three members. Is that the right way to achieve more equality?

Astrid: Actually, I would like to be judged by my experience and skills, by my knowledge. And not be promoted because of a quota. But if reality shows us, and unfortunately it does, that it doesn’t work on a voluntary basis, then I think this decision makes sense. In any case, I’m happy that we have a woman on LucaNet’s executive board – entirely voluntarily! I hope Elena feels comfortable there.

Elena: (laughs) Thank you, yes, I definitely do! To be perfectly honest, I’m also a bit ambivalent about the topic of a mandatory quota. I’m repeating myself, but it shocks me that we, today in 2021, must still talk about equal opportunities for women, and not just in the workplace. Ideally, we are talking about people, human beings, and their abilities, regardless of gender. On the one hand, of course, it’s good that the pool of candidates is being expanded, but I think we need to be careful that this “enforcement” doesn’t fuel additional resentment towards women in management positions. So overall, I see the advantages as well as the disadvantages: With the quota, we get there faster, but I think no one of us wants to be labeled as a quota woman. But unfortunately, we are seeing that it is the male-dominated large corporations that need the quota. I definitely have hope that we’ll be able to do without it in the not too distant future.

Women need to learn that they’re allowed to fail

What does it take to drive equal opportunities further?

Sandy: Companies need to hire more women, without being forced to do so. They need to give us the chance to work in male-dominated professions. But at the same salary, please. And we need more attractive offers for mothers. We need to get away from this entrenched stereotype perception that girls have to be good, sweet, and nice while boys have to be brave and strong. This is something that is instilled in children at a very early age and has a huge impact on our society.

Sarah: Absolutely! I also think that companies need to break through existing patterns and embrace diversity as one of their most important organizational values and then live it. But it goes much deeper than that. There needs to be a fundamental shift in thinking when it comes to family policy. In Sweden, for example, there have been much more liberal and much more family-friendly laws and regulations in the last decades. And now that’s really directly related to the equality that they have today. And to pick up on Sandy’s point: Why should we raise boys differently than girls? Why should we teach them different soft skills? Girls need to be brave and able to take risks too. I read in a study that women only apply for a job if they meet 100 percent of the qualification criteria, while men apply even if they meet only 60 percent. Simply because they don’t want to fail. Men don’t care (laughs). Women have to learn that they’re allowed to fail, that failure is not bad. Otherwise, it can happen that a woman, who would be the ideal candidate for a certain position, doesn’t even apply because she doesn’t think she’s qualified enough.

Silvia: That’s another reason why I see the mandatory quota as an opportunity, because at the current pace, it would take another 30 years for 50 percent of board positions to be filled by women in Germany. And that is simply too long! In the 200 companies with the highest revenue in Germany last year, only 101 of 878 board members were women. At the same time, however, we know that half of the students in Germany are women. It’s not statistically possible that we have so few women on the boards because they’re supposedly not good or not good enough. In the end, I too would prefer to do without the women’s quota, but I think we need it because society is not changing fast enough.

But there can only be a real chance for equality if the work environment changes too. That’s where Corona has had a somewhat positive impact, I believe. Companies are recognizing that high-quality work can also be done in home office. By the way, this is also a great opportunity for fathers to get more involved at home and in raising their children! That brings us straight to the topic of softening gender roles – a lot can be said around this topic, too, but perhaps not anymore today (laughs). But to come to an end: It’s incredibly important that we women make ourselves heard. When men do something, they talk about it. Unlike a lot of women, who don’t necessarily say a lot about what they do every day, whether at work or at home. So, we want to encourage all the great women at LucaNet and around the world to do so: Talk about the great job you’re doing, whether as a mother, manager, or developer. Be proud of yourself!

Be a part of our Youniverse

Do you feel like working at LucaNet? Maybe there is a suitable position for you! You can find our job openings here:

Shiran Wang is our man on site in Shanghai. In this article he talks about what LucaNet is doing in China and what characterizes its customers there.

Find out in our interview with Dominik Duchon, CSO at LucaNet, how LucaNet employees are coming to terms with the corona crisis and what opportunities the crisis presents.

To ensure the success of a business, change and transformation are inevitable. Read more about change management in our interview with Silvia Heredia Minthorne de Kläner and Sabeel Asghar.